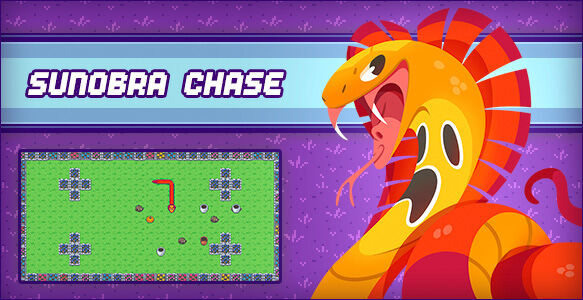 "In this minigame you are playing a Sunobra, which is hungry for pumpkins! Eat as many pumpkins as possible without running into yourself or obstacles and avoid the rotten pumpkins! The game features multiple difficulty settings that have an influence on your score. In this minigame, the score can be exchanged for Pixpet Food Pellets."

Sunobra Chase is one of the first Pixpet Arcade games to be released. The player can trade their scores for a ratio of 1 Score: 1 Pixpet Food Pellet in this game. The player is a Sunobra which must collect Pumpkins. They have 3 lives in Normal Mode, but in Hard or Extreme Mode regardless of the amount of lives touching a Rotten Pumpkin will always result in a Game Over. Losing all lives, touching a plant pot (which only spawn in Hard and Extreme mode), flower beds (ones that are not boundaries only spawn in Extreme Mode), or even touching your own tail which grows depending on the amount of Pumpkins the Sunobra has eaten will result in a game over too. The player can change the difficulty or game speed which will both result in getting an increase score multiplier when playing. Pumpkins give different amounts depending on the difficulty and color, however Rotten Pumpkins will always decrease the player's score by 2 The score multiplier formula is labeled below.

Nightshade Sunobra is a random occurrence where the Sunobra will change color to their B color variation Nightshade Sunobra. It has no effect on gameplay other than a different sprite for Sunobra. It occurs quite frequently, yet some players may not see it until their 50th tries.
Retrieved from "https://pixpet.fandom.com/wiki/Sunobra_Chase?oldid=4824"
Community content is available under CC-BY-SA unless otherwise noted.