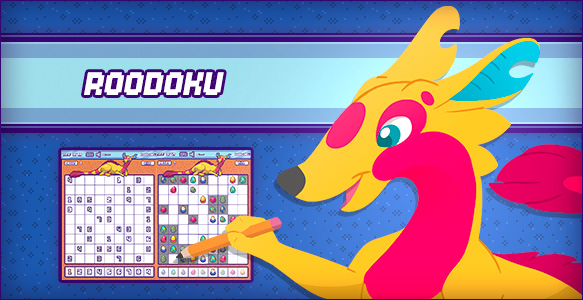 "The Pixpet Rootax has been busy creating this new game for you! The Roodoku is like a Sudoku, but with a small twist! Instead of numbers you can try solving it with Pixpet Eggs (numbers also available). Of course the Roodoku also uses Pixpet Arcade Tokens to send in Highscores. In this arcade game, you can win Pixcoins! The faster you solve the Roodoku, the more PCs you get."

Roodoku is the second Pixpet Arcade games to be released. It has two modes - 1234 and Eggs Mode. 1234 mode acts like the original game, but Eggs Mode replaces the digits 1 through 9 with Pixpet eggs in order in the game (Canisqua, Drax, Feliphene, Fluffpaxa, Igupunk, Indigoat, Pangox, Sawrotag, and Rootax). There is a help and reset button present in the top left. The rule format is the same as in Sudoku. When starting the game random tiles will be set and are unable be changed. The player must use these tiles to solve the puzzle. Buttons on the bottom can be selected to make an square the player pressed into that number/egg. Right clicking on an available space will reset that box. The goal is to get the digits 1-9 or all 9 different kinds of eggs in the nine 3x3 boxes and not have two of the same digits/eggs in each column and row. The reward quantity from playing Roodoku is labeled below.

Retrieved from "https://pixpet.fandom.com/wiki/Roodoku?oldid=4875"
Community content is available under CC-BY-SA unless otherwise noted.