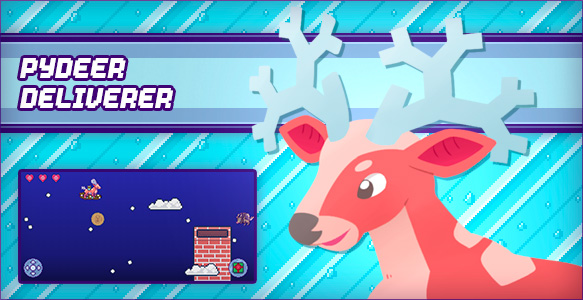 "In Pydeer Deliverer you have to deliver Christmas gifts by dropping them into chimneys! But be careful, the air is also populated with some other pixpets which might get in your way. You can exchange your score for Pixpet Food with PATs (Pixpet Arcade Tokens). "

Pydeer Deliverer is a Christmas themed Pixpet Arcade game. The player is a Pydeer which can move in all directions using either an on-screen joystick, WASD, or arrow keys. They must navigate to chimneys to deliver their presents. Pixpets and power ups appear randomly which can hinder or help the player. When the player hits a Pixpet they will lose a life. Once they hit a chimney or lose all their lives they are unable to continue. Their score can be traded in a ratio of 1 Score: 2 Pixpet Food Pellets. However, the game takes longer than Sunobra Chase. A game with a very similar ratio. Depending on lives started, presents can give more points.

When a Pixcoin is collected the player collects five points. This quantity is not affected by any other value.

When a Heart is collected the player restores one lost heart. If the player already has full health they will get five points instead. This quantity is not affected by any other value.

When an Ice Heart is collected the player becomes immune to contact damage delivered by any Pixpet. The player's heart will also freeze signaling whether the effect is still taking place. The effect wears off after eight seconds.

Mobaths are very common towards the beginning of the game. Their rarity slowly decreases until they can no longer spawn if the player scores 200 or more points. They fly up and down in a pattern and do not target the player whatsoever.

Taffygliders are semi common towards the beginning of the game. Their rarity slowly increases until the player scores 200 or more points where they frequently spawn. They home in on the player's location while flying. However, their homing ability is rather slow which gives the player enough time to dodge their attacks.

Troffinches are semi common late game. Their rarity rapidly increases until they become the most common Pixpet late-game. They usually spawn solo swooping down from above to attack the player. They also frequently spawn in flocks of up to five Troffinches flying right to left.

Parrogrines are rare late game. Once spawned they slowly fly a little to the right of the screen and mimic the player's vertical movements. After a short delay they dash across the screen. During their dash they cannot move vertically.

Retrieved from "https://pixpet.fandom.com/wiki/Pydeer_Deliverer?oldid=5203"
Community content is available under CC-BY-SA unless otherwise noted.